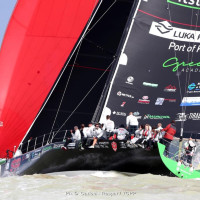 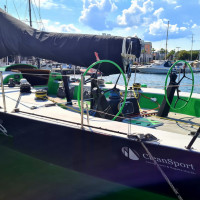 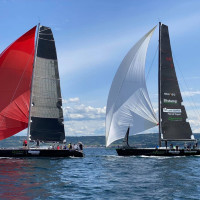 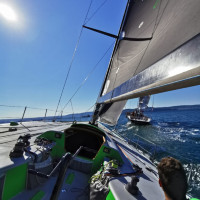 CleanSport One - ex "Amer Sports Too"

The 'CleanSport One', a VOR 60 class sailboat, was launched as the last of the legendary Volvo Ocean Race 60 generation fleet. It was designed in the Farr Yacht Design studio and is theoretically the fastest VOR 60 of its generation. With the original name ‘Amer Sports Too’, under the leadership of LISA McDONALD and her female crew, she successfully circled the globe at the Volvo Ocean Race 2001/02 regatta. Later, she participated mainly in regattas in the Mediterranean and the Adriatic, and for the last few years she rested in Venice.

In the fall of 2017, the said sailboat enriched our company’s fleet and was given a new name, CleanSport One. Upon arrival, we carried out the first, most urgent segment of the renovation and re-trained it for competitive sailing. And already at her first performance, she lived up to all expectations.  Our expectations with 12th place at Barcolana 2017 and 10th place at Barcolana 2019, as well as the expectations of our guests who enjoyed it at Barcolana and some other major regattas. The 2nd place at the Jabuka 2017 regatta was also excellent, where she also appeared at the first offshore regatta in her new role with a crew of guests led by our sailors. A year later, she won 1st place in the same regatta (Jabuka 2018).

After finishing the second segment of the renovation at the beginning of 2019, with which it gained in functionality, equipment and sailing features, CleanSport One is now available for day sailing, team building sailing, 3-day offshore sailing, as well as for appearances in high-profile regattas in the Adriatic and Mediterranean.

CleanSport Too - the legendary "Veliki Viharnik"

The 'CleanSport Too', a VOR 60 class sailboat, was launched in 1992 in Italy, in the coastal town of Mestre near Venice, under the name 'Brooksfield'. With a predominantly Italian team led by skipper Guido Maisto, she participated in the WHITBREAD ROUND THE WORLD RACE regatta in 1993-94. After that, they changed a few owners and names. It also sailed in Italy under the name NAFTA WATCH.

From 2000 onwards, she sailed into the Slovenian sea and, as Mobitel's Veliki Viharnik, under the baton of skipper Dušan Puh, achieved enviable results in regattas in Slovenian, Croatian and Italian waters.

Before the decision in 2018/19 to buy the sailboat, she (sadly) rested in Marina Izola for a few years. The redemption was followed by a more thorough renovation. Now he proudly complements our fleet under the name CleanSport Too and thus works perfectly with his sister CleanSport One in daily and team building sailing for larger companies and teams who want sailing pleasures at a higher level. CleanSport Too also attended Barcolana 2019 after several years. The feelings at such an important event for such a legendary sailboat were indescribable.

Do you wish to experience an unforgettable sailing event?

For all information you can reach us at

This webiste uses cookie.
By continuing to browse the site you are agreeing to the use of cookies.